Welcome to our Conservation pages

Prince Albert Angling Society view conservation as an absolute priority and this consideration echoes through our committee and our Conservation Team. In recent years we have worked on many projects to improve habitat, remove invasive non-native plant species. Working side by side with other like minded angling clubs and partner organisations. Below you’ll find information on some of our current projects. 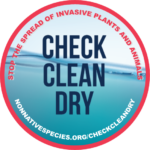 Should you come across one please treat it with extreme caution as they have vicious claws and are quite capable of giving you a nasty nip. In 1912, a large male mitten crab was discovered in a river in Germany. It was the first of many. During the 1920’s and 1930’s the crab flourished, spreading throughout Europe. It has since invaded waterways from Scandinavia in northern Europe to the Atlantic coasts of France and Portugal in the south. 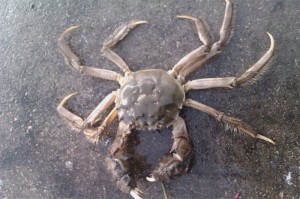 The crabs are now rife in the Thames and have been evident for some years. They can now also be located in the River Mersey and in the Welsh Dee, Mitten Crabs have also made an appearance at the wildlife area on the River Ribble at Brockholes. The crab pictured above was caught several years ago at Dock Road in Connah’s Quay, Flintshire by one of our junior member’s. To give you an idea of size, its shell measured roughly 10cm across. Mittens have also been caught higher up the River Dee at Aldford near Chester with several caught on the River alongside the meadows near the town centre itself. 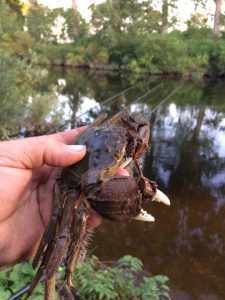 Mittens are now becoming more evident on our waters.

In their native China they are known to travel up to 1500 kilometres upstream. The Dee is something like 110 kilometres in length from its headwaters in Snowdonia to its estuary alongside the Wirral peninsula, giving this species the opportunity to access the whole of its banks and travel further into North Wales via her tributaries.

They are semi terrestrial and as such can migrate across land so obstructions such as Chester weir pose no problem to them at all. They are in fact caught in relatively large numbers at the Salmon count alongside it.

Part of their diet consists of fish eggs, hence, Mittens can be seen as a further potential threat to the Atlantic Salmon and its Redds, this taking into consideration the crab’s ability to travel upstream.

Chinese Mitten Crabs live in burrows in river banks and are known to undermine flood prevention schemes this causes great concern on the Welsh Dee in particular as a large amount of her banks are artificially raised and used to alleviate local flooding.

They are native to China (the clue is in the name) and are believed to have been introduced in either ships bilges or by people for use as a food source.

Mitten crabs are the only species of crab that can be found in freshwater.

The white tooth like claws are a good identifying pointer, so too are the mittens which cover them. 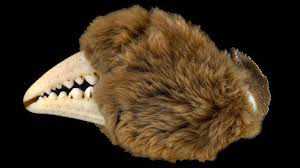 The rumour mill talks of Mitten crabs being caught in traps located on the River Dee as far upstream as Almere ferry. Environmental DNA sampling carried out by the North Wales Wildlife Trust in 2017 has shown them to be present near the confluence of the river Clywedog which enters the Dee near Wrexham although more recent sampling has to date proven negative at this location.

It is important to note that Chinese Mitten Crabs are a non-native invasive species, this makes it illegal to release them into the wild. As a consequence of this, should you catch one on rod and line (they are known to take double maggot and pellet) you can’t legally put them back into the water. Mittens must be dispatched as humanely as possible on site. Technically, carrying them from the River bank, and this would include to your table even when dead, can be seen as a potential means of their spread or the spread of their pathogens and may carry a hefty fine. This is also the case with the American Signal Crayfish (Pacifastacus leniusculus).

What can be done about this invasive species is a question to which we wish we had some answers, currently we would suggest as and when they are caught they are reported to the science community on the following web site www.mittencrabs.org.uk and that they are not returned to the River when caught not only as a point of law but also as a minor bid to reduce their numbers.

We would like to hope that Mother Nature herself will intervene as it has done in some ways with the American Signal Crayfish population which have proven to be cannibalistic, their adults predating on their own juveniles and as such after time, We believe, becoming a self-moderating population. Sadly American Signals have now found their niche in our native biodiversity this being of detrimental cost to our indigenous species by predation and our crayfish populations through the spread of disease (crayfish plague or pox), and increased competition.

In collaboration with other clubs and the Mersey Rivers Trust we have over recent months carried out surveys along the River Dane in a bid to put right some of her issues. This has been achieved with walk over surveys, Kick sampling, Electro fishing and water quality tests. One noticeable factor was the presence of the American Mink.

Richard Bamforth, a Fishery Management Advisor was asked for his assistance in putting together a training session designed to enable us to trap Mink in a co-ordinated manner. American Mink are an apex predator and are known to have an impact on bird life and small mammals including the now scarce Water Vole as well as fish stocks. Trapping will be carried out with the intention of eradicating Mink from the banks of the Dane with the hopeful view of a potential reintroduction of Water Voles to follow sometime in the future.

In order to trap Mink a monitoring system has to be set up, this will show Mink activity (shown here on the River Dane) and viable trapping areas. For this we needed to purchase some basic yet costly equipment. The Angling Trust were approached (who manage the Angling Improvement Fund, a funding raised by the Environment Agency from the sale of rod licenses), and the Mersey Rivers Trust were asked if they could match fund the project on the grounds of improving the biodiversity of the River, both of these applications we are pleased to say were a success.

Trapping is due to start in the near future, should you find any floating Mink rafts please don’t disturb them as you may reduce their effectiveness in doing so. This activity will not only be in evidence on the River Dane as it is planned to be utilized at other locations in the future.

Giant Hogweed is a member of the carrot or Umbellifer family which include species such as Cow Parsley and Hemlock. Umbellula is a Latin word meaning “little shade,” derived from their flowers looking like parasols or umbrellas.

For Some years now we have been spraying Giant Hogweed on several of our River beats this has been successful in keeping our fishing open and accessible to our members.

We first came across this huge plant on the banks of the river Severn at Lower Trehelig where it was impossible to get to the River to fish without wading through it.

The plant (Giant Hogweed) is known to occur on many of our river banks, on some of which we own or lease the fishing rights. Currently we hold or are pursuing spraying licenses granted by the Environment Agency on the Rivers, Douglas, Calder, Ribble and Mersey. With other occurrences along the River Severn and Dysynni licenced by Natural Resourses Wales where required.

The sap from Giant Hogweed and Common Hogweed to a much lesser degree are phototoxic and will increase skins photosensitivity causing in many cases extreme photo allergenic reactions. These symptoms can reoccur for up to seven years leaving its victim highly susceptible to burns from direct sunlight. Contact with any part of this plant must be avoided as even minute amounts of sap can cause blistering following exposure to sunlight. Sap is so dangerous it can even cause blindness if it gets into the eyes.

Animals grazing Giant hogweed may be susceptible to poisoning or digestive disorders. Ingestion of Giant hogweed has also been found to interfere with the fertility of female livestock. Other negative impacts include the creation of a monoculture, out-competing native flora by the denial of sunlight for photosynthesis. Increased river bank erosion and increases in flood risk.

When cleared a patch of Giant Hogweed can soon become re infested from either a localised seedbank or indeed seed washed down from further upstream. A single plant can create 20 to 50 thousand seeds said to remain viable for up to 15 years. Without a protracted whole River approach, the Giant Hogweed is here to stay unless some time in the future an acceptable form of biological control (similar to rust fungus and Himalayan Balsam) can be found. Currently the only effective agent in our arsenal is glyphosate which at this moment in time is the only pesticide suitable for use in or near water. Glyphosate is under continual review and may not remain eligible for this use in the future.

Spraying is normally carried out in May when the plant is small enough to get at and long before it flowers and releases it seed into the environment. The following image shows the stems purple blotches. 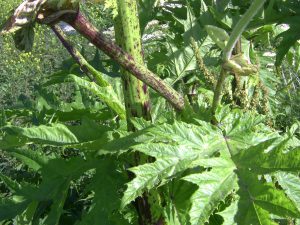 Which as well as its height are a good identification factor. 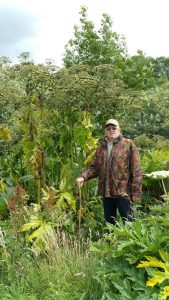 Quagga mussels are filter feeders and large numbers of them will remove the lower levels of the foodchain impacting on everything else within that system. Please take care not to transport this to any other waters. more…

King George the VI once said “The wildlife of today is not ours to dispose of as we please. We have it in trust. We must account for it to those who come after”. In my view the control of non-native species is fundamental in the protection of our native flora and fauna. Anglers are among the greatest observers of wildlife due to the very nature of their interest and perhaps with this in mind harbour the opportunity to become the greatest conservationists on the face of God’s Earth.

More information for Bio-Security for Anglers can be found here